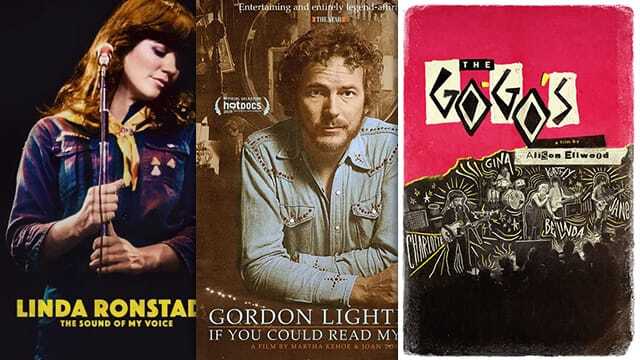 As the fall settles in and we find more excuses to remain couchbound, it's a good time to catch up on recent music documentaries, most of which have made it to various streaming platforms. As ever, the '60s and '70s remain fertile ground for continued exploration, and now that the '80s are 30-plus years in the rear view, there's an ever-increasing amount of biographical material being dredged up on that era's biggest stars. We've watched a handful of recent music documentaries and offered our thoughts, both pro and con, about how to best spend your streaming time if you're in the mood for some music with your movie. Having seen quite a few of these over the years, we admittedly can be a difficult lot to please, and obviously not every rock doc can be or Dig! or Some Kind of Monster, but for those looking to fill in a blind spot, or just to hear some classic songs again with a little added context, there's no shortage of options.

Once Were Brothers: Robbie Robertson and the Band (Hulu)
One of the more controversial recent entries into the rock doc world, Once Were Brothers is the story of the Band through the eyes of Robbie Robertson, presented as the undisputed true version of events, although fellow surviving member Garth Hudson appears only in performance footage, and dissenting voices are actively avoided. The songs are still great, and the usual standbys of Clapton, Springsteen, Scorsese, and Geffen are trotted out to praise the Band's authenticity, but there is a sense that Robertson is again asserting himself as the sole author of the Band's story, which is likely history repeating itself, considering how The Last Waltz turned out. And since plenty of that footage is revisited here, there's a sense that we've done all this before. (Chris Steffen)

Echo in the Canyon (Netflix)
Echo in the Canyon is one part postcard from the hazy '60s heyday when the Laurel Canyon sound was unknowingly being created in California, and one part navel-gazing concert film/anthropological dig spearheaded by Jakob Dylan. The film contains a worthwhile collection of hilarious and touching first-hand stories from Stephen Stills, David Crosby, Ringo Starr, Eric Clapton, Jackson Browne, Tom Petty, producer Lou Adler (but notably no Joni Mitchell), and would make a terrific 45-minute TV special. The rest of the film consists of amiable but largely toothless live covers by Dylan (Jakob, not Bob), Fiona Apple, Beck, Jade Castrinos (from Edward Sharpe and the Magnetic Zeroes), Cat Power, Regina Spektor and Norah Jones. It culminates with a living-room chat between the younger musicians essentially looking wide-eyed at old album covers and earnestly saying "This time was really something special" to each other. Streaming is the perfect medium for this film, allowing the viewer to skip through the less interesting concert and "coffee chat" sections and let the original artists tell their own tales. (Zac Johnson)

The Quiet One (Hulu)
For casual fans, the Stones are the Mick and Keith show, but the real heads know that the rhythm section of drummer Charlie Watts and bassist Bill Wyman had just as much to do with the band's bawdy blues sound. Wyman, who left the Stones at the conclusion of the Steel Wheels tour in 1990, was also the band's unofficial archivist (alternately: a rich hoarder who labels each item and has enough space for everything), and wasn't as hard-living as his bandmates, so his clear-eyed perspective on the band's origins and rise is a far cry from Keith's "I don't remember the '60s" refrain. Thankfully, Wyman remained on good terms with the band and was able to use extensive performance footage and Stones music, which is a luxury not afforded to all bassists (see: Duff McKagan). Excellent editing, pacing, and avoidance of rock doc cliches make The Quiet One a pleasant surprise, although it predictably dances around his proclivity for dating very young girls. For our Hulu dollar, the highlights include the story of how he legally changed his last name to Wyman (in deference to a man-crush from his army days), and his lengthy friendship with artist Marc Chagall. (Chris Steffen)

The Go-Go's (Showtime)
There's a recent subcategory of music documentary best described as "Our case for induction into the Rock and Roll Hall of Fame," and this dash through the history of the Go-Go's clearly falls into that bucket. It feels like a hi-def rehash of the band's Behind the Music episode, but the band's relatively brief career and minimal output doesn't make for an entirely compelling feature-length proposition. You'll hear "We Got the Beat" and "Head Over Heels" incessantly, as well as multiple reminders -- both spoken and printed onscreen -- that they remain the only all-female band to write and perform their own songs to hit Number One. The firsthand accounts of drug addiction are the only parts that go deeper than a Wikipedia glance, and the intra-band tensions are well laid out, but the bulk of it slides away after the credits roll. (Chris Steffen)

Gordon Lightfoot: If You Could Read My Mind (Prime Video)
Whether you think of him as Canada's Bob Dylan (which this documentary certainly does) or as maybe more of a Marty Robbins-level storyteller, Gordon Lightfoot has persevered through hardships, trends, and the events of his song "Sundown" to create a legacy as one of his home country's most enduring musical figures. Fellow Canadians Geddy Lee, Sarah McLachlan, and the Guess Who sing his praises (along with Alec Baldwin, for some reason), and Lightfoot displays awareness of some of his more problematic material. But with more time-jumps than The Last Dance and "I wrote songs inspired by the events of my life" being presented as a revelation, there's not a lot of meat on the bone here beyond the basic biography and assorted hosannas, other than an excuse to hear these songs again and to watch montages of other artists performing them. An entire documentary about one of his canoeing trips sounds tantalizing, though. (Chris Steffen)

Linda Ronstadt: The Sound of My Voice (HBO Max)
It's amazing to still be able to spot some of the most egregious music documentary cliches in the wild: is our star moving to Los Angeles to start her career? Better play "California Dreamin'" and show the Hollywood sign! Did she collaborate with musicians who later became famous? Someone should smugly say "They went on to form a little band called the Eagles." On the plus side, Linda Ronstadt's songs are given more space to land than other documentaries that rush from clip to clip, and the film vividly presents the clear passion behind her decision to record a Spanish language album in 1987 (which could have been its own documentary). A testy clip from a talk show appearance is another highlight, in which she fields smarmy questions about dating California governor Jerry Brown and performing in apartheid-era South Africa with direct responses and thought-out answers, allowing an all-too-brief glimpse into how her mind works. (Chris Steffen)

Vinyl Nation (VOD)
As streaming has gradually dominated the music landscape in both a business and technological sense, the quiet but determined resurgence of vinyl has earned itself no shortage of column inches via "Vinyl is back!" feature stories. Vinyl Nation profiles members of older and younger generations who feverishly line up for Record Store Day exclusives, and goes inside the few remaining pressing plants for some sweet, sweet footage (but not enough) of records being made. Vinyl Nation primarily feels like an attempt to explore the evolved relationship between music fans and physical media, which has shifted from practical and necessary into a more collector-driven and almost fetishistic space. It's easy to see ourselves in the enthusiastic pre-adolescent boy featured in the documentary, who feels like an alien because his classmates don't know who David Bowie is, but it's just as easy to wish he didn't feel rushed to jump from four to 40 years old. You'll have plenty of time to go bald and buy some plaid shirts later on, kid, so enjoy it while you can. (Chris Steffen)

They Scored: When Pop and Rock Artists Lost (Or Won) It At the Movies

They Scored: When Pop and Rock Artists Lost (Or Won) It At the Movies